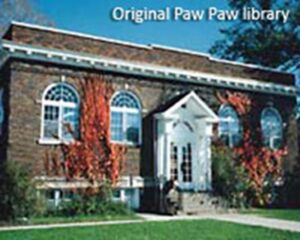 On January 25, 1917, the Paw Paw newspapers announced that Mrs. Florence Harvey had offered the private library of her late husband, Reverend E. H. Harvey, to start a public library.  She made the donation conditional that the Village provide a library building and annual support for library service.  The Coterie Club, a women’s organization dedicated to promoting cultural activities, also donated their lending library.  Mrs. Caroline Sellick pledged $3,000 in memory of her husband, William J. Sellick, to purchase land for a library.

Encouraged by these acts of generosity, the Paw Paw Village Council submitted a grant application to the Carnegie Library Foundation Fund.  Industrialist Andrew Carnegie’s library foundation helped to build 1,795 libraries across the United States.  In April 1917, Paw Paw received one of the last of these grants for $10,000.  Paw Paw citizens voted to approve a bond for another $4,500 for the building and an annual $1,450 stipend for library service.  A building site was chosen at 129 South Kalamazoo Street, but the war delayed construction. The Paw Paw Library opened on June 25, 1920.  Newspaper accounts of the grand opening thank the many individuals and groups who worked to bring a library to Paw Paw.  Clara Rennie, a member of the Coterie Club, served as the first librarian. 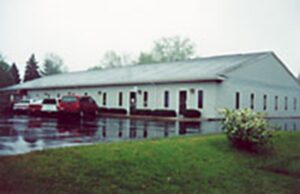 For 71 years, the Carnegie building was the Library’s home. By the 1950s, the Library started to outgrow its walls. Space continued to be an issue for the next three decades. Shelves were crowded together and overfull. Programs had become an important public library service, but the Library had little space for groups and no dedicated parking. The Library Board considered two solutions: expanding the Carnegie Library and building a new library but could not secure funding for either option.  In August 1987, voters made the library a special district and gave it the reliable funding it needed to grow.  Three years later, the Library renovated an office building and moved to 609 West Michigan Avenue.   The new library building was three times the size of the Carnegie and had a full parking lot.

Over the next 21 years, many changes took place in the Library.  The Library’s new location near the middle school made it a popular after-school destination.  Public computers attracted even more people. Library use continued to grow. By 2010, the Library was starting to outgrow its walls once again.  Library supporters aided by the renewed Friends of the Library started a capital campaign for a new building. The campaign was called Beyond Books. 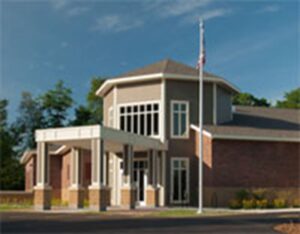 In 2011, a new library building was constructed at the same location.  The new “green” building is LEED-certified with natural prairie grass landscaping.  The 16,000 square foot facility has a local history room, quiet study rooms, ample seating, and a large room to accommodate community meetings and library events.

To make it easier for everyone to use and enjoy library materials, the Library eliminated fines in 2019.  That same year Library Board purchased neighboring Soapy’s Car Wash.  The building was demolished, and the grounds were converted to green space.  When the pandemic started, the Library adapted by offering curbside pick-up, online programs, take-and-make activities, and more digital books, movies, audiobooks, and classes.

The Paw Paw District Library is proud of its history and committed to serving the community well in the future.